T-R PHOTO BY ROSS THEDE – Marshalltown sophomore Aaron Seberger completes his portion of the 2×100-yard backstroke in teaming with Dane Petty for a winning time of 2 minutes, 2.76 seconds on Saturday at the Bobcat Invite at the Marshalltown High School pool.

The Marshalltown boys’ swimming team won all 11 events on Saturday, sweeping its way to a Bobcat Invite title.

Seems fitting for a squad that hasn’t lost a meet yet, either.

The Bobcats took the top spot in every race in their own five-team, relay-based invitational at the Marshalltown High School pool on Saturday, scoring each one of the 98 team points available to them when the day began.

Getting the team to start the day with the desire to do exactly that has been head coach Mike Loupee’s greatest challenge.

“They’re a good bunch of guys to work with, they’re fun-loving, and sometimes getting them to focus and be a little bit more serious is the biggest challenge,” Loupee said. “And if that’s the toughest thing that we as a coaching staff have, we’re going to continue to have a good season.

T-R PHOTO BY ROSS THEDE – Marshalltown’s Tyler Downey cuts through the water during his leg of the 400-yard freestyle relay to close out Saturday’s Bobcat Invite at the Marshalltown High School pool. The Bobcat quartet of Nash Perisho, Downey, Marcus Barker and Carson Beals set a new season-best time of 3 minutes, 26.42 seconds in winning the event.

The opening event provided the closest race the day would know, as Marshalltown edged out Newton/Colfax-Mingo/Pella in the 200-yard medley relay by a half-second. The Bobcat quartet of Aaron Seberger, Brock Keeler, Stephen Blom and Ethan Benscoter came in about four seconds off the team’s best time of the season, but its clocking of 1 minute, 50.96 seconds was enough to give Marshalltown the early lead.

From that point on, it was all Bobcats.

Tyler Down and Benscoter won the 2×200 freestyle, and Marcus Barker and Nash Perisho dominated the 2×200 individual medley. Seberger and Carson Beals touched up first in the 2×50 freestyle, and Blom and Perisho cruised in the 2×100 butterfly.

Benscoter and Beals left the rest of the field in their wake in the 2×100 freestyle, while the 2×500 freestyle ended up being the fourth-closes race of the day. Downey and Blom claimed a nine-second triumph over Atlantic’s Cole Sampson and Bryan York, and kept the Bobcats rolling. 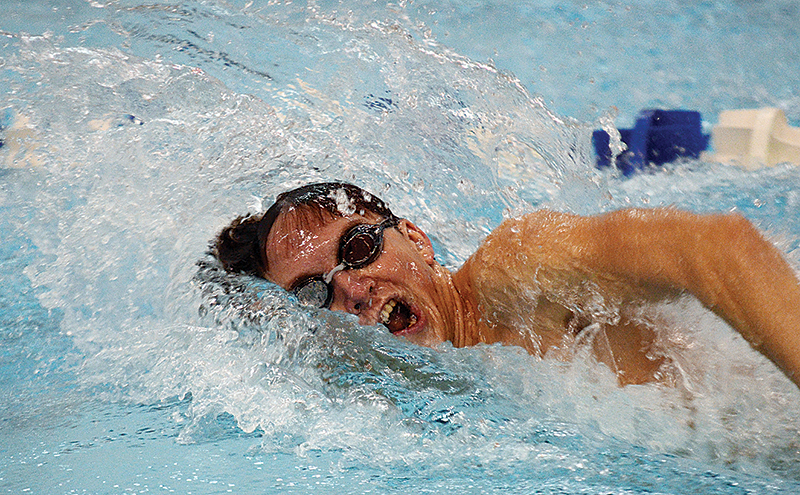 The MHS quartet of Seberger, Barker, Perisho and Beals posted a new season-best time in the 200 freestyle relay, winning the second-closest race of the day in a combined time of 1:33.05.

Dane Petty and Seberger teamed up to win the 2×100 backstroke, and it was Barker and Keeler who emerged victorious from the 100 breaststroke.

Needing one last event victory to sweep the day, Marshalltown’s 400 freestyle relay foursome of Perisho, Downey, Barker and Beals actually lapped some of their competition in closing the invitational with another season-best clocking of 3:26.42.

“That’s the first time in the 30 years I’ve been coaching swimming in Marshalltown with either the Boone Invite or the Bobcat Invite with our relay format that we’ve won all 11 events,” said Loupee. “We’ve won 10 out of 11 a few times at Boone but never run the table. That’s good to see the boys do that. I think they’re pretty pleased with being the first team to do that under coach Loupee so that’s a fun thing for them.”

“Generally at this point after so many meets and so close together, we generally swim this meet a little flat and a little tired, so they came out more aggressive and more focused to start the meet and the swims and the number of season-best and lifetime-best times reflect that,” Loupee said, “so [assistant] coach [Leah] Barkema and I are pleased with how well we swam throughout the entire meet both varsity and junior varsity.

On the whole, Marshalltown amassed 24 lifetime-best times and 33 season-bests, and Loupee was still shouting technical adjustments to his assistant coach and team managers to jot down during the Bobcats’ dominant performance.

It’s those little things that make the difference in the big moments, and those are yet to come for this group.

“It’s been mentioned to them that we have much more competitive meets and there are some opponents lurking out there that are going to give us all we can handle,” said Loupee. “We can definitely point toward the fact that with what our competition is doing, we definitely have work to do.

“In this technological world the kids know what the times are out there, they know who’s got those times, but as a team sometimes to draw their focus that we as a team, we as a unit can always improve and with the heart of our CIML schedule coming after Christmas break we’ve got plenty to be focused on. We had a lot of season-bests and lifetime-bests and we are looking at all the technique things that can be improved, but that’s a double-edged sword. We’re doing a lot of things that could be better but at the same time we’re swimming faster, so if we can put good training with improved technique, they’re going to drop a lot more time.”

Marshalltown’s 98 points was more than enough to ward off Newton/Colfax-Mingo/Pella as the runner-up with 63 points. Cedar Rapids Kennedy came in with 44 points, Atlantic totaled 41 and Waterloo rounded out the field with 28.

The Bobcats (7-0) close the pre-holiday portion of their schedule with Thursday’s CIML Iowa Conference dual against Southeast Polk.

“We’ve got a heavy load of training over Christmas break so it’s good for them to have a good, positive experience today and have a lot of positives as a springboard to get through the doldrums of winter,” said Loupee. “Nothing makes swimming and coming in at 5:30 in the morning easier than winning.”

T-R PHOTO BY ROSS THEDE – Marshalltown’s Tyler Downey cuts through the water during his leg of the 400-yard freestyle relay to close out Saturday’s Bobcat Invite at the Marshalltown High School pool. The Bobcat quartet of Nash Perisho, Downey, Marcus Barker and Carson Beals set a new season-best time of 3 minutes, 26.42 seconds in winning the event.

T-R PHOTO BY ROSS THEDE – Marshalltown sophomore Aaron Seberger completes his portion of the 2×100-yard backstroke in teaming with Dane Petty for a winning time of 2 minutes, 2.76 seconds on Saturday at the Bobcat Invite at the Marshalltown High School pool.

Roob’s observations after Eagles squeeze out a win in Washington